WildWorks and NYT- the new generation of WildWorkers 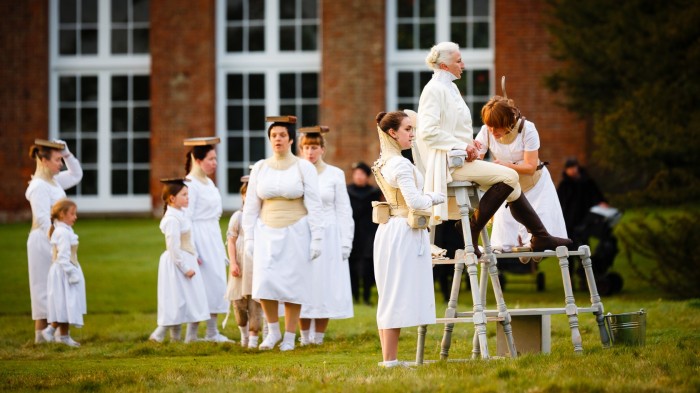 In 2013 we set up camp in the beautiful surroundings of Tehidy Woods, Cornwall and spent a wonderful two weeks working in collaboration with the The National Youth Theatre REP Company. We returned once again to the woods in 2014 for another week of wild workshops continuing our development of ideas for Wolf’s Child and furthering our collaboration with the National Youth Theatre. It was during these weeks that we were lucky to meet four of the performing company currently appearing in Wolf’s Child at Norfolk and Norwich Festival. Ellie James is playing Thorn, Sophie Ellerby plays Kas Crow, Lousia Beadel is Larch and Tomas Thompson is in the wolf chorus.

Ellie: In 2013 I took part in the National Youth Theatre Rep workshop, which ran in partnership with WildWorks. We went to Cornwall and spent two weeks devising work based on the ideas that eventually became Wolf’s Child. What’s amazing is that the photo shoot we did towards the end of that course, the images that were taken, are almost identical to how the show looks now. The vision for the play was so clear back then, and we’ve been a part of it almost since the beginning, which is great.

Sophie: I also took part in the NYT Rep course at Tehidy Woods in 2013. Wolf’s Child was at the research and development stage back then, so we spent two weeks exploring Bill’s ideas for the show, which have now turned into this fully formed beast. I also have connections with Kneehigh and WildWorks from the past.

Ellie: I play Thorn, who is the “Wolf’s Child”. She’s a great part to play; she’s this cool kid, who’s feisty and cheeky, loyal and vivid, and who happens to have grown up with wolves. She’s more animal than human, sort of genderless. It’s fun to play her, although there’s a lot of running involved! It’s great to work with Kyla (playing Rowan) and building a relationship with her onstage and offstage. I’ve learnt a lot from her. 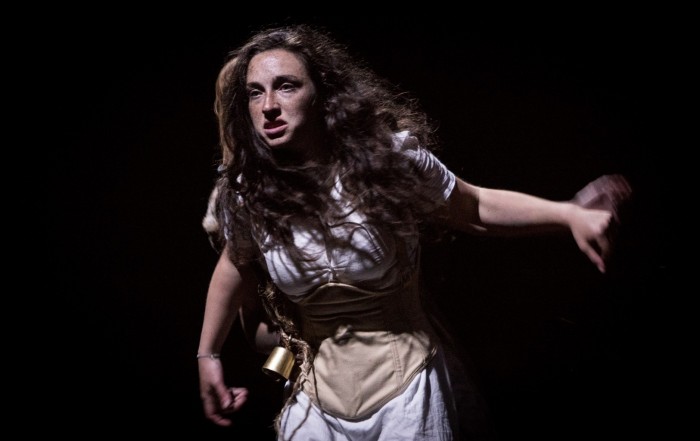 Sophie: I play Kaz the Crow, who is one of the narrators of the story. Although she has a big personality, she’s not just there to tell the story, she wants attention! She’s like the naughty kid in the class who you can’t help but find endearing. I love her; I asked Bill how cheeky I could go with her, and he said there wasn’t a limit, just go with it. It was brilliant to be so encouraged to explore, and it’s meant that the show is different each night as I ad lib with the audience. I like to think that Kaz has respect for Kafka, the other crow narrator played by Steve Jacobs, who tries to keep her in line, but she gets too excited about the story, so goes a bit wayward at points… I’ve done a few crow selfies with the audience, for example!

Ellie: I have a lot of scratches! But it’s incredible being here, and being able to inhabit the world of the play in a realistic setting, not just in a traditional theatre. It is going to be really hard to leave; everyone, cast and crew, are so lovely! We’ve become this huge family, surrounded by the woods and we’ve been working in such an organic way, that I’m not sure I’ll ever be able to go back to normal life.

Sophie: I’m lucky because I haven’t had a tick yet! Ellie’s had seven! I’m getting good at getting them out of other people. Our first week of preview shows had some pretty bad weather, but it was still brilliant despite the rain. Everyone clubbed together and kept morale high, and it seemed like the audience loved it even more maybe because it was so dramatic in the torrential rain, or maybe because they saw how hard we were all working. Myth designed me the warmest costume though, so I’m very grateful for that! I have to say as well: Richard the head ranger is an absolute don. Make sure you put that in – he won’t know what I’m talking about, but he is a don.

Ellie: We were given the chance to explore our characters and be playful with them from the start; nothing was prescribed to us, which is different to how I’ve worked before. We did a lot of improvisation around the scenes, so we have a sense of ownership and responsibility for the play as much as anyone. I don’t have any speech to work with either, so my role is entirely physical, which has been interesting; I’ve learnt how to express so much without needing words to describe it.

Sophie: It’s been a very fluid, creative way of working; Bill has been open to suggestion from the start and there’s a sense that you can say anything and it won’t ever sound stupid. There’s a tight vibe to the company; we’re all very supportive of each other so that we can create the best possible production that we can. I’ve never worked with a company so positive and friendly. We’re all living together so there’s a family ethos; its like we’re all on a massive holiday. I can’t believe it’s a job!

Ellie: Like I said, I’m not sure if I’m going to be able to leave the woods! I’ve got a few auditions coming up, but nothing lined up at the minute.

Sophie: I’m going to be the assistant director on the Playing Up course, which is run by NYT. That’s at the Arcola at the end of June. 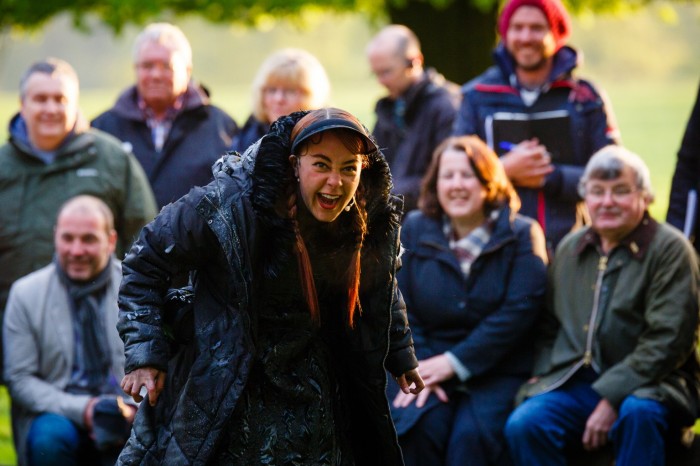