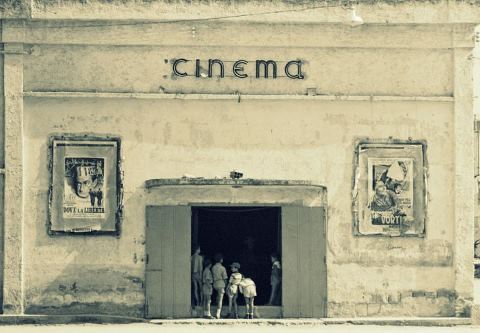 On Friday 2nd October, at the Newlyn Art Gallery, two of Wildworks’ Associate Artists organised a benefit evening dedicated to the children living in the Medina of Tunis who dream about making films and creating a better world. The aim of the evening was to raise funds for the children’s film club in Tunis, but most importantly it was about raising awareness of the situation in Tunisia and sharing the work of the incredible artists who live there.

Agnieszka Blonska and Mercedes Kemp describe the motivation behind organising this event:

“Since the Arab Spring in 2011, Tunisia has struggled with serious political and economical issues. Although it has remained democratic, the economy is strained, the security situation remains precarious and the country continuously tries to find a balance between protecting democratic freedoms and battling the forces which want to destroy these freedoms. Recent terrorist attacks at the Bardo National Museum in Tunis and in Sousse only deepened the economical struggle directly affecting the tourist industry.

Many people feel locked in and hopeless, but artists keep fighting through their art for democracy and freedom of expression. A major focus of this artistic engagement has been Dream City, the Tunis Biennale of Art in Public Spaces. This autumn WildWorks will be travelling to Tunis to participate in the Biennale. In preparation, a small team of WildWorkers took part in a two week artists immersion session in Tunis in May this year. As a result, we plan to create A Cinema of Dreams, a space where memory and hope coexist. Old and young citizens of the Medina have contributed to this project. The elders reminding us of where we come from so we may not forget. The children, gazing into an imagined future, showing us that, to make anything happen, we have to dream of it first. Two groups of children have been working through the summer creating films about hope.”

During the evening they presented profiles of some Tunisian visual artists, poets and musicians. They also had a Skype interview with writer and journalist Hatem Bourial, and poems were read by Mary Woodvine.

“In a society undergoing reconstruction, we have to lay down the foundations of what we would like to have for our future: Art as cement of a new society, art as a constructive practice and a commitment to social and intercultural cohesion. But, also art to create the new forgotten areas of exchange (…)”

All the raised funds will be spent on film equipment (i.e. small portable projectors) for the children’s film club in the Medina of Tunis.

For those of you who couldn’t make it but would still like to support the cause, please visit:
https://mydonate.bt.com/events/tunisdreamcity