The Passion of Port Talbot 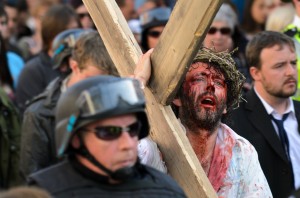 Easter weekend will always resonate with us at WildWorks. Last year we lost Bill on Good Friday. As always, his timing was impeccable as it allowed us to grieve privately in the bubble of the bank holiday weekend. As we get closer and closer to the show we were working on with Bill into his final days, 100: UnEarth, our thoughts turn to Easter weekend 2011 and The Passion of Port Talbot.

Passion was in abundance: Over 1200 community members took part as writers, musicians, singers, performers, makers, stewards, messengers, angels and demons. We found powerful locations where the story could unfold. We walked the beach against the backdrop of the massive, smoke belching steelworks, sang songs in underpasses and searched for the ghosts of the people displaced from their homes by the building of the motorway.

Michael Sheen had come home to star in this one-off, ground-breaking theatrical event. Representing all that we had gathered, he led the people of Port Talbot on a 3-day journey, giving them back their memories and a stage to show them.

With a final procession through the streets to a seafront roundabout (the crucifixion) we amassed a gathering. This was no flash mob, this was ownership and pride.

There were more than 25,000 people in Port Talbot witnessing The Passion, a 3-day event that spanned Easter weekend 2011. Regrettably, I wasn’t one of them.

I was at our second largest show, 100: The Day Our World Changed; another one- off, an adrenalin-filled 15 hours of not knowing how many people were coming or quite what might happen! And I will be at the next one as we return to The Lost Gardens this summer with 100: UnEarth.

The big question is will you be there? This show will mark the end of an era for us and the dawning of a new one. Miss it and you might regret it!