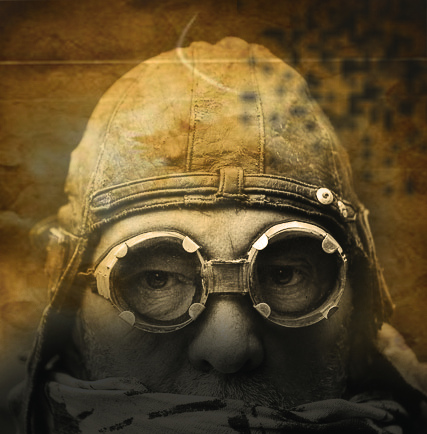 To herald our performance 100: The Day our World Changed at The Lost Gardens of Heligan we have given our twitter feed to a 1914 Motorcyclist who witnessed the shooting in Sarajevo of the Archduke Ferdinand. Now he rides across Europe to bring news of the impending war home to Mevagissey

Born Mevagissey 1874. Educated at Truro Grammar School and Trinity College, Oxford. Joined the Duke of Cornwall’s Light Infantry and served as a Lieutenant in the 2nd Battalion in the Second Boer War. On the Regiment’s return to Cornwall he resigned his commission and took up a Fellowship at Trinity. He has published several works of history and a volume of war poetry. A noted traveller, when at home in Mevagissey he often goes out with the fishing fleet and maintains his collection of motorcycles.

13th July 2014 5pm, Prague has risen before against the Empire. When all is over, who knows what new borders there may be.

13th July 2014 3pm, The purposes of empires: glory, but also money. Prague grows in resentment but still they will fight, against their own interests.

12th July 2014 5pm, I come to Prague, watched by statues on the rooftops as silent as those resentful infantry; this is empire, not Imperialist.

12th July 2014 3pm, On the roadside, victualling between silent forests, a sullen column of soldiers, grey clad, so unlike the peacocks of Vienna.

12th July 2014 1pm, Into Bohemia, a long day’s ride. Passing, I frighten horses, threatening their laden carts. At their heads the peasants fight for control.

11th July 2014 5pm, Carrying this burden alone, tomorrow I leave for the true heart of this spiral, Berlin, via Prague. I must foresee the worst that will be.

11th July 2014 3pm, I place telephone calls to those few I know with an apparatus, to the Foreign Office. I need to speak, to say what I have seen. None reply.

11th July 2014 1pm, In Sarajevo, in Belgrade, in Budapest: I found no replies to my warnings. And now here, the same silence. Will nobody hear me?

11th July 2014 11am, July 11th 1914: to the telegraph office through the strutting streets, seeking messages from home. Nothing awaits me.

10th July 2014 5pm, The fear here is that Russia will go to war on behalf of Serbia. German collaboration is necessary to deter this.

10th July 2014 3pm, An ultimatum to Serbia is being prepared. It will be designed to be impossible to satisfy. Then – war.

10th July 2014 1pm, The city is full of talk and preparation. The Ministerial Council has been meeting. Meanwhile the German Kaiser has gone on holiday.

10th July 2014 11am, July 10th 1914 Vienna. There is much excitement about events. At breakfast I am asked for news from the east. I pretend not to understand.

9th July 2014 5pm, Why do we not simply say no to this? Why do we everlastingly accord with war, defer to the warriors?

9th July 2014 3pm, Austria-Hungary is renewing itself for war, calling up reservists who are seen to leave their homes in every town. So many sorrows.

9th July 2014 11am, July 9th 1914: early on the road to Vienna the true heart of this war-built empire. Much activity around the railway yards.

8th July 2014 5pm, Evening in another strange city. I feel a new solitude. Is nobody hearing these warning messages? Why does no one reply?

8th July 2014 4pm, The newspapers and cafés are full of the German Kaiser’s ‘blank cheque’ to Austria-Hungary to do as they please with the Serbs

8th July 2014 1pm, Budapest does not feel itself the equal of Vienna in the empire. Resentment against Austria burns – another issue in the horror awaiting us

7th July 2014 3pm, Wars have flowed through here since times before time, taking everything. Who of these people understood why they suffered? Who would care?

7th July 2014 1pm, I ride through flat lands. It is easy to imagine great armies of history sweeping across this plain. Soon they will again.

7th July 2014 11am, July 7th 1914. Subotica is a town of Serbs, Hungarians, Jews together. Soon these people will kill each other on behalf of others.

6th July 2014 5pm, The incident at the border leaves me behind schedule. I push on into the evening but am forced to stop at a town called Subotica.

6th July 2014 3pm, At the border, suspicious eyes ask why I cross. I say there is no war yet, demand free passage. Then the Triumph will not start.

6th July 2014 2pm,I pedal to no avail. The Hungarians laugh, then push till the engine fires. We drink Tokai to each other. To Peace. But soon we will war.

6th July 2014 11am, July 6th 1914: away at dawn on the road to Budapest, crossing into Austria-Hungary almost immediately. Belgrade is vulnerable.

5th July 2014 midday, I realise my plans have changed. I no longer aim for the sun of the south but for the war furnaces of the North in the old blood trade

5th July 2014 9am, Nationalism is the new word I hear: the errant child of the merchant states who must manipulate their masses to believe that they exist

5th July 2014 7am, Serbia gains by eating away at decaying Habsburgs to the North, Ottomans to the South. It is wild youth spoiling for a fight.

5th July 2014 5pm, July 5th 1914. Ours is an old Empire. Here the old is abraded by the new: fading Austria Hungary, upstart Serbia. Both must try their luck.

5th July 2014 4am, Evening: Belgrade. I hear talk of Princip the hero, killing for the honour of the Slavs, the creation of a pan-Slavic state: Yugoslavia.

5th July 2014 3pm, When you ride you’re alone. You think. Behind Austria-Hungary, before, Serbia. Imagined lines. If no one drew maps could there ever be war?

5th July 2014 17pm, Noon: the Serbian border. Soldiers watch each other across the Drina Bridge, waiting for the war all their leaders want, on their own terms

5th July 2014 11am, July 5th 1914: with first light I leave Sarajevo for Belgrade. The Triumph runs well through the wooded valleys, plains and farms.

4th July 2014 5pm, I will leave Sarajevo at dawn. Thank God. I believe I have witnessed the first unravelling of all we have known. Please hear my message

4th July 2014 3pm, In the street outside Amar’s workshop I pedal the Triumph back into life. The local people cheer, one cries ‘Allah akbar!’

4th July 2014 1pm, Amar has sent word – the magneto has arrived from Germany, and two spares. There is kindness still in Sarajevo in July 1914.

4th July 2014 11am, Again a night without sleep. Sarajevo’s darkness is full of life – marching boots, shouts, murmurs. Here all comes to crux

3rd July 2014 5pm, So many fights are being spoiled for, so many Powers thinking this must be their moment. There are prizes to be seized through war

3rd July 2014 3pm, Since June 28th and the deaths in the Franz Josef Strasse this city has seethed in its siege of mountains, a midden brewing something foul

3rd July 2014 1pm, Franz Ferdinand and his wife Sophie, Duchess of Hohenberg, were shot here in Sarajevo by Gavrilo Princip when their car stalled.